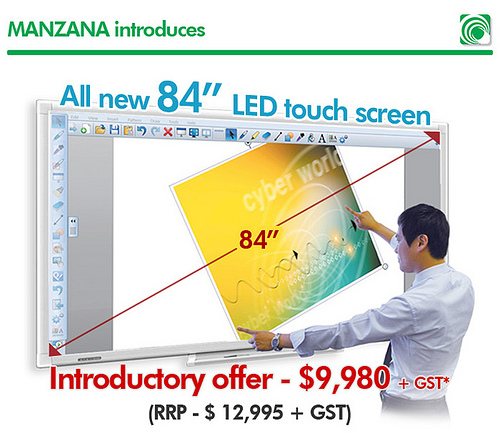 Manzana is offering its customers an amazing introductory offer of $9,980 +gst for the all-new ULTRA-DEFINITION 84” LED interactive touch screen. Ideal for any environment that’s looking to engage their audience, the massive 84” LED surface provides users with multi-touch screen control over their computer via a shared surface that is larger than a standard interactive whiteboard (77″)!

The introductory offer of $9,980 +gst is only available to orders placed in October or November of 2012 and for delivery/payment in January/February 2013. For orders placed after November the price will revert to the RRP of $12,995+gst.

Ultra-definition is the next level of television display up from Full HD. With almost 4* the resolution of a Full HD TV, the 84” LED surface offers more delicate and clearer pictures.

Unlike other screens in the 2Touch interactive range that use an LCD surface the 84” uses an LED surface meaning: an extra wide screen surface that is High definition but also larger than a standard IWB, lower power consumption compared to similar sized LCD, a typical lifetime of 50,000 hours – most projector bulbs last around 1,000 – 2,000 hours, and eliminates the burden of having an external projector. 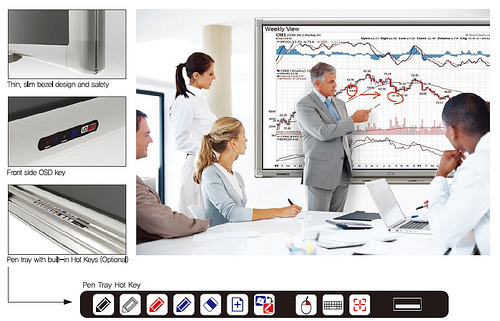 In addition to the ultra-definition surface (see below) the 84” interactive LED surface provides users with full touch control over their computer. Using our advanced four camera system you’re LED surface is setup for multi-touch use. This allows for basic gesture use on traditional computer programmes as well as full use of enhanced multi-touch specific software.

*The introductory offer is for orders placed during the months of October and November 2012 for install and payment in January/February 2013.